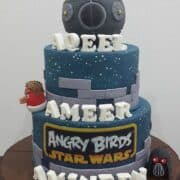 I made this Star Wars Angry Birds cake in 2015 for a joint birthday celebration of 3 sibling boys. The mother wanted to celebrate all their birthdays together and requested that I make a cake with all the boys' names on it.

And off course, the theme for the cake had to be one that was favored by all three of them. And Star Wars Angry Birds was their choice.

The cake, though looks like a lot was going on on it, was not complicated or difficult to make. It was a 2 tier cake. And the Death Star topper is a Styrofoam dummy. Using a dummy made it a lot easier for me as supporting a round shaped cake requires more work. And the 2 Angry Birds characters, i.e.  Lard Vader and Red Skywalker were made out of fondant.

How to Make Angry Birds Cake

Death Star topper in styrofoam for the Angry Birds cake

The exact logo I used on the Angry Birds cake

Names on the Angry Birds cake

Hope you find this tutorial helpful.

Thank you for reading and happy decorating 🙂