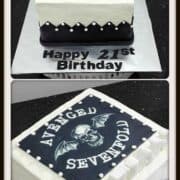 Here is how I made this Avenged Sevenfold 21st Birthday Cake

And this was how I assembled the cake:

And that was how I decorated this Avenged Sevenfold 21st birthday cake.

Hope you enjoyed reading this.