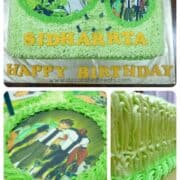 I made this Ben 10 birthday cake for my second boy's 6th birthday. It's probably boys and their age thingy because his brother also requested for a Ben 10 cake when he was 6!

While I took a bit more time to hand paint Ben 10 on the cake for my elder boy (see below), this time, I just used an edible image purchased from a local cake decorating supplies shop. It was my son's choice anyway, so I just went with it. And of course, the green color theme was his choice too!

This was the cake I made for my elder son:

Edible images are quite a lifesaver when you need to decorate a themed cake but pressed for time. In my case, I used edible images, not because of the time factor, but simply because it was the request of the birthday boy.

These were the main supplies I used to make this Ben 10 birthday cake:

And that was how I decorated this super easy Ben 10 birthday cake.