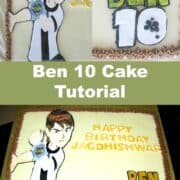 I made this Ben 10 cake for my son’s 6th birthday. Ben 10 and his Omnitrix watch were the ‘in-thing’ for him, so when I asked him what cake would he like for his birthday, he obviously chose Ben 10 and specifically requested for the Omnitrix watch to be on the cake too!

This was a fairly easy decorating idea. And that is simply because there are no special decorating skills required, neither are any special tools nor cutters required except for some basic decorating tools and piping tips.

How to Decorate a Ben 10 Cake:

These were the main supplies I used for this Ben 10 cake project: