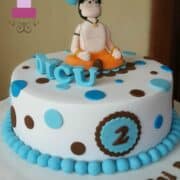 I made this Chhota Bheem cake for a 2 year old boy, Thikshet Sai Ram. Chhota Bheem is a television show for your children and the main character is a strong, muscular boy called Chhota Bheem.

Overall, this was a pretty simple cake to make except for the human topper. In making the topper, I followed the techniques I learned in this Craftsy class. It is such an awesome class, one that I would recommend for anyone wanting to learn human figure modeling. And I must say, I was quite happy with the way the figurine turned out.

Now, Chhota Bheem was supposed to be a bit more muscular, especially his shoulders and arms, but mine did not turn as muscular as it was supposed to. I made him muscular off course, but the gum paste sort of lost a bit of shape as it was drying. That is one problem I used to have working with fondant and gum paste in a humid climate. But that was before I switched to air conditioned room to work on my cakes. I don’t have that problem anymore so if you live in a humid climate like me, air conditioned rooms are a real life savers when it comes to working with fondant and gum paste.

Back to the cake. Let’s look at the main supplies I used to make this cake and the decorating guide.

How to Make a Chhota Bheem Cake

And this was how I assembled the cake:

The blue and brown mat

With that, the Chhota Bheem cake was completed.