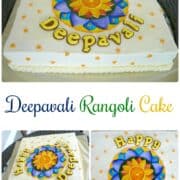 I made this Diwali Rangoli cake a couple of years ago and I just realized that I have never shared this cake anywhere. Since the Diwali festival is just 2 months away, I think this would be a good time to share the cake now.

The inspiration for this cake came from the colorful rangoli patterns that are very much part of the Indian culture.

Accordingly to Wikipedia, Rangoli is an art form native to Nepal, India and Bangladesh (known as Alpana) in which patterns are created on the floor in living rooms or courtyards using materials such as colored rice, dry flour, colored sand or flower petals (extracted from Wikipedia (https://en.wikipedia.org/wiki/Rangoli)).

My Rangoli pattern on this cake, however, was created using fondant. And I used the 'painting technique' to create this bright-colored edible Rangoli on my Diwali cake.

How to Make a Diwali Rangoli Cake

These were the main supplies I used for this cake:

And this was how I decorated the Diwali Rangoli cake:

And finally, I completed the Diwali Rangoli cake decoration by piping a rope border and random orange dots (in groups of three) all around the cake.

And that was how I made this Diwali Rangoli Cake.

Hope you liked this sharing!