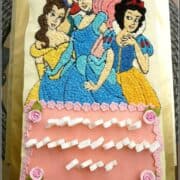 These Disney Princesses cake and cupcakes are another one of my specially customized cakes, and one that was quite challenging to decorate too!

The cake was for little Abrianna’s first birthday. It was requested by her Aunt who wanted all the Disney princesses on a single tier cake. She also specifically requested for the cake not to be covered in fondant!

This was a large cake, carved out of 2 rectangle cakes measuring 13 inches by 11 inches each. The Disney Princesses image was obtained from the internet. I had to transfer the pattern onto the cake with all the tiny facial details, etc.

If you notice, I made a blunder with Cinderella’s eyes and Snow White’s too! I wish I could go back and correct them, but my customer totally did not mind it. I must say, the hardest part of decorating this cake was getting the facial features right. And the longest time taken was to transfer the bevy of Disney princesses onto the cake.

The cupcakes, on the other hand, were pretty straight forward. I used edible images of the Disney princesses and framed them on with the star buttercream border.

Here is how I decorated this Disney Princesses cake and cupcakes:

Decorating the cake and cupcakes:

And that was how I decorated these Disney Princesses cake and cupcakes.

Hope you enjoyed this sharing. If you have any comments or questions, pls leave them in the section below, I will get back to you as soon as I can.