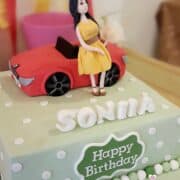 I made this glamorous 21st birthday cake for a young lady who happens to be a national badminton player for Malaysia. The cake was ordered by the birthday girl’s mother. She asked for the cake to be decorated with a human figure topper to depict her daughter and a red BMW topper that was supposedly her daughter’s dream car.

This cake was ordered together with a set of twelve 21st birthday cupcakes. Each cupcake had one human figurine topper on depicting the members of the family. It was the mother’s idea to present the cupcakes to the girl as a token of their love for her. Click here to read more about the cupcakes.

Back to the 21st birthday cake. This was a square cake, measuring approximately 9 inches in width and 4 inches in height. I baked it using my butter pound cake recipe. The deco on the cake itself was pretty straightforward except for the toppers which took me a while to make.

How to Make a 21st Birthday Cake

The glamorous human figurine and the car topper

21st birthday cake with a lady figurine and car topper

And that's that. My elegant 21st birthday cake decorating guide.