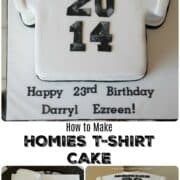 I made this Homies t-shirt cake for a customer. She gave the picture of a t-shirt (I cannot locate the picture anywhere on my pc so I am unable to share it here) and told me to make a cake that looks exactly like the t-shirt including the font type, size and color.

So I set on making this Homies t-shirt cake.

Here is how I made this Homies T-shirt Cake:

These were the main supplies I used to make and decorate the cake:

And this was how I assembled this Homies T-shirt cake:

And the Homies t-shirt cake was done.

This is a very simple and easy to make t-shirt cake. The trick is to have the t-shirt template drawn up on a piece of paper to guide the carving.

Hope you enjoyed this tutorial.