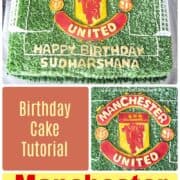 I made this Manchester United cake for my brother’s 23rd birthday. He is a die-hard MU football fan and was smiling from cheek to cheek when I presented the cake to him. And he was so careful in cutting the cake, he made sure no one accidentally cut the logo. Such is his love for Manchester United!

This was a buttercream cake, and was fairly easy to put together. The only thing that took me a bit of time to make was the logo.

How to Decorate a Manchester United Cake

Supplies needed to decorate the cake:

How to decorate the Manchester United cake:

Close up of the Manchester United cake

The grass on the Manchester United cake

And that’s that. My Manchester United cake.

Hope you find this sharing useful.