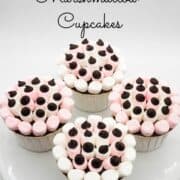 These chocolate marshmallow cupcakes with almonds not only taste good, they are also fun to make too.

You can even call these chocolate chips marshmallow cupcakes. That’s because I’ve added chocolate chips to the cupcake batter too. So you will notice as you eat these cupcakes that there are tiny bits of yummy chocolate morsels in them.

And I have also added some ground almonds to these chocolate cupcakes. The resulting cupcakes are soft, fluffy, and moist and pair so perfectly well with the chocolate ganache and marshmallows topping.

These cupcakes are pretty easy to make. The ingredients for the batter are:

And the ingredients for the topping and decoration are:

Here is how to do it, step by step:

And that was it. My marshmallows cupcake decorating idea!

I made 2 versions of this design, using the pink and white layers in different combinations as can be seen below:

Here is the full printable version of my chocolate marshmallow cupcakes recipe: 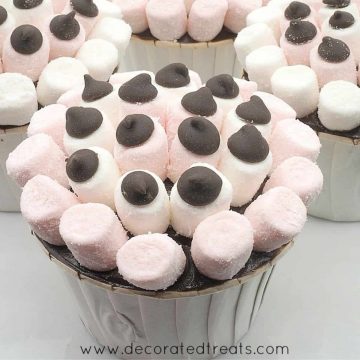 And that’s my decadent chocolate marshmallow cupcakes recipe for you!