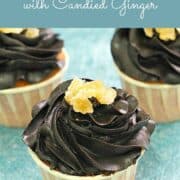 I love these orange ginger cupcakes. They are packed with all my favorite flavors – ginger, chocolate, and orange and are super moist and absolutely delicious.

The distinct feature of these orange ginger cupcakes lies in the way I have combined all the 3 ginger, chocolate and orange flavors together. Although they are all in one cupcake, I have added them as separate components.

When you take a bite into one of these ginger cupcakes, you will be biting into an orange flavored cupcake that has chunks of candied ginger as the filling and chocolate ganache as the topping. Chocolate and orange are already a delectable combination and the candied ginger simply adds a lovely twist to them.

The dark chocolate I used for the chocolate ganache frosting is not overly sweet. It makes a perfect combination with the sweet and zesty orange flavored cupcakes.

The total number of ginger cupcakes you will get out of this recipe would depend very much on the size of the cupcake casings you use. I used medium-sized muffin casings and managed to get a total of 10 chocolate ginger cupcakes with the recipe below.

Here is the full printable version of my orange flavored ginger cupcakes recipe. 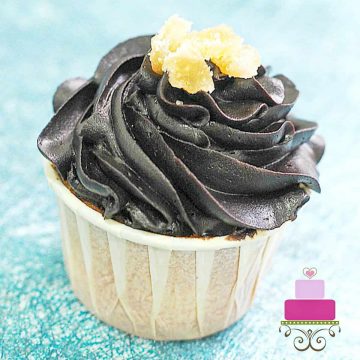