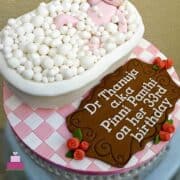 I made this pig birthday cake for my sister’s birthday. The cake was requested by her husband for her 33rd birthday. And he let me decide on the theme for the cake. He knew I would choose something sarcastic or humorous and was perfectly ok with it.

I simply love it when I am left to decide on the design of cakes. It allows me to come up with something unique for the cake design. And that was exactly what I did for this cake.

My sister used to be nicknamed ‘piggy’ at home. So I decided there could not be a better theme for her than a piggy themed cake for her birthday.

A pig birthday cake design with a touch of humor

The design of this birthday cake was inspired by this hippo in a bathtub design created by Maisie Parrish in her book Fun and Original Character Cakes. I decided to use some of the elements on that design into my pig birthday cake and changed the hippo to a piggy.

I must say, this was a super fun cake to decorate. This was partly because I got a good chance of getting on at my sister. And also partly because I got to decide on the design. The cake itself was the bathtub and it was a rather small cake. The rest of the decorations were all in fondant and gum paste.

All in all, I hope you will find this pig cake design as exciting as I did decorating it.

How to Make a Pig Birthday Cake

And this was how I put the pig birthday cake together:

The checkered cake board design

The bubbles in the bath tub cake

A fondant pig in the bath tub birthday cake

And with that, the pig birthday cake was complete.

Hope you enjoyed this sharing.