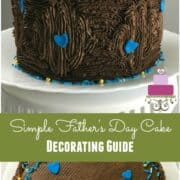 This is my simple Father's Day cake for 2018. My siblings and I decided to throw a small Father’s Day party in my home this year to celebrate my dad as well as our husbands who are also dads. We had a pot luck gathering and I took up the cake as well as a few other light dishes while my sister and brother contributed the rest of the food. In the rush of doing groceries and cooking, the cake kind of got pushed towards the afternoon for baking and decorating and so I had to really rush with the decoration to finish it on time.

I know I could have done better with the cake decoration but overall, no one had any complaints. We were all so glad to be able to get together and spend the evening as one family.

My parents are both vegetarians and to cater to them, I decided to bake an eggless cake for this Father's Day. I was looking out for eggless cake recipes on the internet and saw a couple with some good reviews. Some of these recipes used pretty much the same ingredients so I finally picked one recipe, modified the ingredients as I did not have some of those ingredients listed at home and came up with my own version of vegetarian chocolate cake recipe.  I was not quite sure if the cake would turn out well since it was my first try and I have modified the recipe quite a bit, but I was so glad that it turned out absolutely delicious.

Before I continue with the decorating process, lets look at the main supplies I used for this cake.

How to Make a Simple Father's Day Cake

The top view of my simple Father's Day cake

Covering the sides of the chocolate Father's Day cake

And that was how I completed my simple Father's Day cake for 2018.