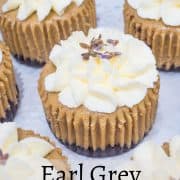 Making these mini cheesecakes is pretty easy. It is similar to making a typical baked cheesecake like the New York cheesecake except that these are generously flavored with Earl Grey tea.

I used Earl Grey in tea bags and used a total of 2 bags, but the cake can also be made with loose leaves.

And while I made the Earl Grey cheesecake into mini sizes that are perfect for individual sizes, you can easily make this recipe into a larger single cheesecake. The recipe below is sufficient for a 7 inches round cake tin. Increase the baking time to 60 minutes. If you wish to make a larger 9 inch Ear Grey cheesecake, simply double the recipe below and keep to the 60 minutes baking time.

The first step in making the mini Earl Grey cheesecake is to prepare the tea itself. I used Earl Grey from tea bags (2 tea bags for this recipe).

Baking and assembling the mini cheesecakes

Why do you need to bake the cheesecake in a slightly reduced temperature compared to normal cakes?

Is it ok to not grind the tea leaves into a fine powder?

Can you bake this mini cheesecakes into a single Earl Grey cheesecake?

Why should you take extra care to not overbake the cheesecake?

What is water bath and is it necessary?

How long do these cheesecakes last?

Here is the full printable version of my baked Earl Grey cheesecake recipe with chocolate crust, and lavender-whipped cream topping. 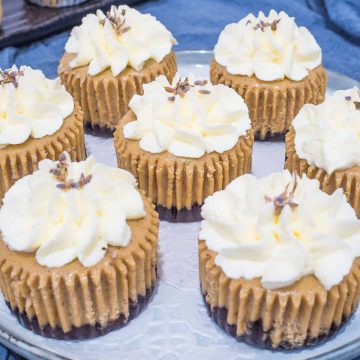 And that's my easy baked Earl Grey cheesecake recipe for you.