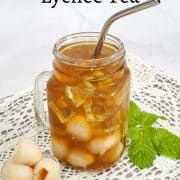 This iced lychee tea makes an absolutely refreshing drink on a hot day. With only 4 ingredients, this sweet fruit flavored black tea is easy to make and enjoyed by all!

This is an easy fruit tea recipe. It starts with a base of black tea that is infused with lychee fruit syrup and real lychee fruits. Served chilled, this black lychee tea makes an excellent thirst quencher!

Lychees are tropical fruits found mostly in China and the South East Asian region. They are about the size of strawberries and look quite similar, however, lychees have thin coarse skin that needs to be peeled off to get the sweet lychee flesh.

The lychee fruit flesh is white in color with a long brown seed on the inside. Both the skin and the seeds are inedible and should be discarded.

Lychees are loved by many for their sweet floral smell. The fruits are sweet and juicy with a slight hint of citrus taste. Although finding fresh lychee fruits may not be possible all year round, these fruits are widely sold canned in syrup. And although slightly sweeter than the fresh lychees, canned lychees can be enjoyed in the same way as fresh lychees. They are also very often the preferred choice when making desserts due to its their consistency in taste.

The lychee black tea recipe on this page is made using canned lychees.

How to Make Ice Lychee Tea

For the black tea:

For the lychee syrup:

Making the lychee syrup for the tea

Can you adjust the amount of tea used in the recipe?

Can you reduce the amount of syrup used in the recipe?

How long will the lychee iced tea last?

Can the lychee black tea be consumed hot?

Can you make this lychee iced tea with other types of tea?

Here is the full printable version of my easy black lychee tea recipe: 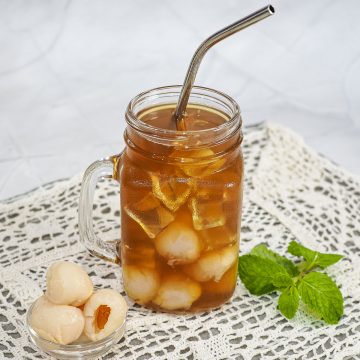