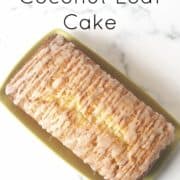 This coconut loaf cake was my third attempt at making a coconut filled cake from scratch. It all started with me coming across shredded coconut during one of my baking supplies shopping trip.

That was the first time I actually came across shredded coconut. I live in Malaysia and we have coconuts in abundance here. In fact, they are so common here that we have so many delicacies that are made using coconut. Most of the time, these local delicacies use coconut milk. Other than the milk, we also use the white coconut flesh. However, it is always available in a much finely grated form i.e the desiccated coconut. So in all my life, that was the first time I actually saw coconut flesh in a shredded form and was so excited that I bought it without actually knowing what I would do with it.

Coconut Cake with Shredded Coconut in the Batter

I have baked coconut cookies and coconut macaroons and made coconut candy before but never a coconut cake. So I set on baking one from scratch.

So, after 4 attempts, I finally managed to nail down the perfect coconut loaf cake recipe with both the coconut milk and coconut flesh added to the batter. To this, I also added vanilla. The results – a truly aromatic, coconut loaf cake that lets one feel not just the taste of coconut but the actual coconut flesh too! The coconut cake was pretty easy to make. I baked mine in a loaf pan and gave it a light drizzle of lemon glaze icing for a perfect vanilla coconut loaf cake.

How to Make Coconut Loaf Cake

The main ingredients for this coconut loaf cake are as follows with the full details in the recipe card below:

And the glaze topping is made up of a simple combination of the following:

Bake the coconut loaf cake for about 35 to 40 minutes and do a skewer test to check if it is done. Remove the coconut cake from the oven and let it rest in the tin for about 10 minutes before turning it out onto a wire rack to cool completely.

Serve the cake plain or drizzle with lemon glaze icing. Use a sharp knife to slice the coconut cake.

Tips for the Best Coconut Loaf Cake Ever

Proportion of flour to sugar

Do not over bake the cake

Use a sharp knife to cut the cake

Here is the full printable version of my coconut loaf cake recipe. And while you are free, don’t forget to read the recipe notes right below. They contain absolutely useful tips for the best coconut cake ever. 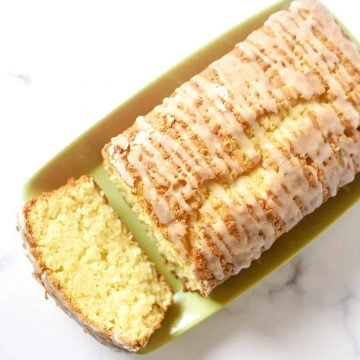 Here are my other recipes and posts you might want to check out: