This cream cheese frosting is not only as delicious as it should be, it crusts so perfectly and works well in warm temperatures too!

Cream cheese icing is delicious. Pair it with any type of chocolate cake, or red velvet cake or carrot or banana cake and you will never go wrong.

I for one, love this sweet and tangy frosting and its my favorite to go my eggless chocolate cake.

As delicious as cream cheese frosting always is, working with it has not always been easy for me. And the one and only reason for that is because of the heat and humidity here in Malaysia. I have tried many versions of cream cheese frosting recipes only to be disappointed with how runny it ends up on my cakes and cupcakes. The problem is not with the recipes, it’s just that the relationship between cream cheese, butter and hot weather is always very bad. For this reason, I have always avoided this frosting when decorating cakes until last weekend when I made an eggless chocolate cake for my mother’s birthday.

The first time I baked the egg less chocolate cake, I paired it with chocolate butter cream. And as I was having the cake, I knew that cream cheese would be a perfect pair for the cake. Not because the buttercream was not right, but because the fudgy and moist texture of the cake would be perfect with a sweet and tangy frosting like the cream cheese frosting. So when I baked my mom’s birthday cake a couple of months later, I decided to fill and cover the egg less chocolate cake with cream cheese icing and true enough, my entire family loved the combo.

And when I whipped up the cream cheese frosting, I did not refer to any recipes. I figured out that since butter and cream cheese both don’t work well with heat, I decided to replace all the  butter with shortening. I did not want to reduce any cheese taste from the frosting (its called cream cheese frosting for a reason and I really did not want to comprise the cheese taste) so I only replaced the butter. My basis for this recipe was my butter icing recipe. It’s the stiffer version of my butter cream recipe and I thought since cheese is easily melted in heat, a little bit more of icing sugar would give the frosting a stiffer consistency that would allow it to hold shape well. And to help with the consistency, I decided to add some shortening to the mixture. The proportion of sugar to butter/shortening for my butter icing recipe is 5:2, so using the same basis, I measured 300 grams of icing sugar.

Next, I measured the cream cheese. The idea is to have both the cream cheese and shortening to add up to 120 grams. I measured my cream cheese to be 90 grams and shortening to be 30 grams. I added these to my mixer and creamed them together before adding my icing sugar and vanilla essence. I was still not sure if these measurements would work and had extra cheese and icing sugar in hand in case the consistency was too stiff or too soft. Half way of creaming the mixture, I realized that the cream cheese frosting at that very stage was actually quite tasty and had that perfect firm consistency for piping. It felt like Einstein moment for me at that time, but I did not want to be too confident. So I removed the icing from my mixer bowl and started to fill and frost my cake. The consistency remained the same throughout and although I did not do any piping on the cake, I could see that it held its shape well in the mixer bowl.

And when we cut the cake, I realized that it has also crusted very well, just like my buttercream recipe and at that moment, was so happy and proud that I finally found a recipe for cream cheese frosting that I could use without having to worry about it melting away in the heat.

And just to be sure that the icing would work well for piping, I did these pretty cupcakes over the weekend, and just as I expected, the frosting turned out perfect for piping. And it crusted so well that even in at my room temperature close to 30 degrees Celsius, the frosting was able to crust and hold its shape.

So here I am sharing the cream cheese frosting recipe that was not only easy to mix but was firm enough to hold its shaped when piped and crusts gorgeously. 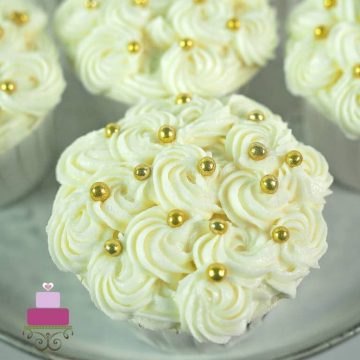 This cream cheese frosting is not only as delicious as it should be, it crusts so perfectly and works well in warm temperatures too!
5 from 1 vote
Print Pin Rate
Course: Dessert
Cuisine: American
Keyword: Cream Cheese Frosting
Prep Time: 20 minutes
Total Time: 20 minutes
Yield: 400 g
Author: Priya Maha
Prevent your screen from going dark
Metric - US Customary