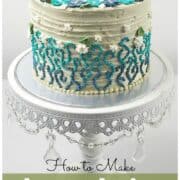 Here is a buttercream flowers cake I made not too long ago.

The cake decoration started off with just a circle of dark blue and turquoise 5 petal buttercream flowers, and then I decided some white will be a nice combo so added some simple piped flowers which in some angles looked like water lilies.  And then I thought the cake was still too plain, so decided to add some swirls in dot piping in a combination of dark blue and turquoise.

For coherence, I repeated the dotted swirls at the bottom of the cake in the same dark blue and turquoise buttercream dots. And I added random white 'buttercream lilies' to end the swirls.

How to Make Buttercream Flowers Cake

Supplies needed to decorate this cake:

Steps to put the cake together:

Baking and covering the cake with buttercream

Horizontal lines on the sides and top of the cake

The top of my decorated buttercream flowers cake

The sides of the buttercream flowers cake in pretty blue, turquoise and white hues

I used Wilton petal tip #101 for the blue and turquoise flowers and tips #18 & #16 for the white 'lilies'. You can pipe the lilies directly onto the cake. To make the lilies, I piped one star on the cake, lifted the nozzle completely, and then piped another one on top of the earlier star.

I have put together a separate page on how to pipe the 5 petal buttercream flowers, step by step. You can read all about it here (or click on the image below):

Hope you enjoyed this post as such as I enjoyed putting it together.