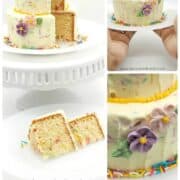 According to Wikipedia, confetti cakes are cakes with sprinkles mixed in the batter, and when baked, the sprinkles melt into dots of colors in the cake resembling confetti. Hence the name 'confetti cake'.

The mini cake idea I am sharing on this page not only has the 'confetti' effect in the cake, it also carries the same effect in the frosting, creating a truly fun confetti cake with an explosion of colors not only on the inside but also on the outside.

Here is how I made the Mini Confetti Cake

These are the supplies I used to decorate this 2 tier mini confetti cake:

Decorating the sides of the mini 2 tier cake

And this is how I made my mini confetti cake, with cheerful speckles of color inside and out!

Mini confetti cake, inside and outside!

Hope you enjoyed this mini confetti cake idea as much as I enjoyed putting it together.