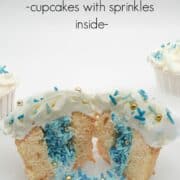 Here is a pinata cupcakes (sprinkles inside cupcakes) decorating idea for you to try as your next cupcake project.

This is a fairly easy technique and the only skill that is needed for this cupcake decorating idea is piping skills, and even that, it’s the skill of piping simple buttercream rosette swirls.

As you can see, the sprinkles I have used on the pinata cupcakes are in 2 shades of blue plus some gold ones. This mix is one which I custom created, meaning, I colored the blue ones on my own (I purchased the white ones and colored them to the needs of my cupcake project. Click here to read how I colored them) while gold ones are store-bought. I mixed all three colors together for this combination of the blue-gold colors.

A note of caution with gold and silver dragees - most of these are often very hard to bite and can sometimes hurt your teeth, so choose your sprinkles wisely!

The cupcakes are made using my butter pound cake recipe, baked in muffin casings. The ingredients are :

The topping and filling on the other hand consists of:

You would also need the following tools to decorate these pinata cupcakes:

These cupcakes are made using the creaming method, where the butter and sugar are creamed first before all the other ingredients are added in.

Assembling and decorating the cupcakes

Why you should not fill the casings full with batter when baking?

Can you use normal cupcake casings?

How to store the cupcakes?

Here is the full printable version of my pinata cupcakes recipe. 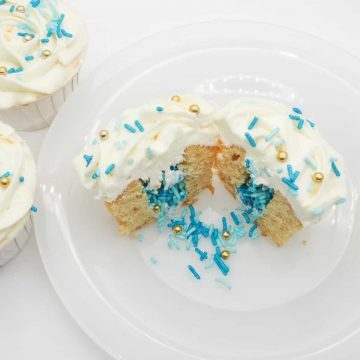