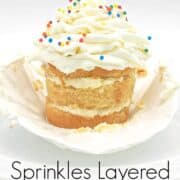 The cupcakes may be a little time consuming to assemble but the end result is definitely worth it. They leave people wondering how the cupcakes were layered in the first place. The layering also provides a great alternative for vertical fillings rather than horizontal layers.

From the outside, the cupcakes look like any other typical cupcakes, with buttercream swirls on top and a touch of colorful sprinkles. But wait until you take a bite into the cupcakes, and then you will feel the difference with the sprinkles buttercream that is in layers in the cupcake!

I used my butter pound cake recipe for the cupcakes. And they were baked in paper muffin cups. The filling and frosting is my buttercream recipe in soft consistency. The consistency was soft enough for the piped swirls on the cupcakes to fall into soft pleats on top of each layer.

There are 2 types of sprinkles in these cupcakes. The first ones are the slightly long ones (made out of chocolate) which I mix into the buttercream to fill the cupcake layers. The second type is called nonpareils. These are tiny round sugar balls in a myriad of colors. These are for decoration on top of the cupcakes after the buttercream swirls. Both types of sprinkles were store-bought.

The cupcakes are made using the creaming method, where butter and sugar are creamed first, before the eggs and other ingredients are added in.

How much batter to fill each casing?

Can you use normal cupcakes paper casings instead of muffin casings?

Can you omit the sprinkles in the buttercream?

Here is the full printable version of my layered cupcakes recipe.

And that's my layered cupcakes recipe for you.