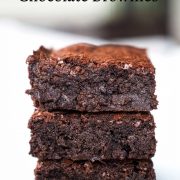 I love brownies with chocolate, but it's always so difficult to find ones that really meet my expectation.

No doubt some are really really decadently moist, dense and soft, just like how brownies are meant to be. But most of the time, I am grossly disappointed. They are either too dry or too cakey; or too gooey to the point that they feel undercooked.

When I read reviews about brownie recipes online, I notice that not everyone is into the same texture for brownies. Some like them really gooey, some like them dense and fudgy while others like them with a slightly cake like texture to them.

This chewy brownies recipe yields a not-too-gooey or fudgy brownie. It is made with chocolate (hence the name brownies with chocolate), bakes with a lovely crinkled top and is decadently moist in texture on the inside. In comparison to my cocoa powder brownies here, these chewy chocolate brownies are slightly lighter both in color and texture and are therefore perfect for those who prefer them that way. And because they are of a sturdier structure (despite being wonderfully moist), these brownies with chocolate are perfect for cutting into shapes and for decorating.

Difference between the chocolate brownies and cocoa powder brownies

Overall, these brownies differ mainly in texture with one being softer and dense while the other is sturdier and lighter. Nevertheless, both are decadently moist and delicious and are sure to not disappoint all brownie lovers.

How to Make Brownies with Chocolate

These brownies require the following ingredients:

As I have mentioned in my cocoa powder brownies page, there are a couple of very important factors that determine the success of your brownies other than a good recipe. It is really worth the time to understand these factors so that you too bake the best brownies every single time.

Type of the baking tin

Here is the full printable version of my decadent brownie recipe: 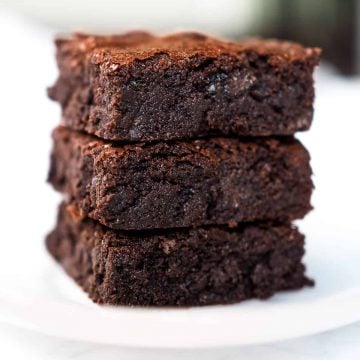