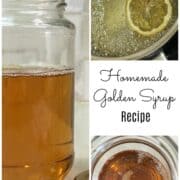 I am sharing on this page, my true and tried homemade golden syrup recipe that is not only easy to make but also super delicious.

You only need 3 key ingredients to make this sweet syrup - sugar, water and lemon. And it only takes about 15 minutes to make your own golden syrup.

There are many dessert recipes out there that call for the use of golden syrup. While you can find golden syrup in most groceries or baking supplies stores, it's never the same as making your own golden syrup. One thing for sure, you save quite a bit of money by making your own. And not to forget the freshness and exclusiveness of it being made at home, with all the TLC.

What is Golden Syrup?

Golden syrup is a form of inverted sugar syrup made in the process of refining sugar cane or beet juice into sugar, or by treatment of a sugar solution with citric acid (source: Wikipedia).

This syrup has its own unique flavor and is commonly used in a range delicious recipes of baked goods and also desserts. It has a deep golden hue (a beautiful amber color) and is of the consistency of honey and and maple syrup. Golden syrup can be used on French toast and pancakes. It is also a great sweetener in oats. Drizzle a spoon or two of the syrup on your bowl of oatmeal porridge for a delicious breakfast. Golden syrup can also be used as a glaze for cakes and breads, as a sweetener in your coffee or tea and can even be drizzled on your ice cream.

All these 3 syrups are liquid sweeteners in golden color and have their unique flavor.

Golden syrup has a deep golden hue to it (or amber), similar to honey and maple syrup. While all three might look the same, the difference is definitely noticeable in the taste. Honey has a more intense taste while maple syrup is normally a little lighter. The golden syrup, on the other hand, has a slightly caramelized and tangy taste. Corn syrup is clear and sweet.

The main difference between all these syrups lies in the ingredients used to make them. Golden syrup is a sugar solution thickened with lemon juice. Honey, on the other hand, is derived naturally from bees. Corn syrup is made from the starch of corn and maple syrup from sugar maple trees.

Some of these syrups have geographical origins too. Golden syrup is more widely used in the UK and Europe while maple syrup in North America. Corn syrup is more widely used for commercial purposes and is generally cheaper. Honey, on the other hand, though available in almost all regions can be costly due to it being derived from natural sources. Hence you will often find British dessert recipes use golden syrup but not maple syrup. And similarly, recipes from the United States often hardly ever use golden syrup but are more inclined towards maple syrup or honey.

On a general note, though you may be able to substitute these syrups with one or the other, you need to be aware that the final results might not be exactly as it is intended to be unless the recipe clearly provides so.

And since golden syrup is vegan, it is definitely a great substitute for honey.

Unlike the above, golden syrup, treacle, and molasses are somewhat similar in that they are all made using sugar.

It can also be generally concluded that molasses and treacle are essentially the same. Molasses is used more widely in the US. Treacle, on the other hand, is more widely used in the UK. They are both a more caramelized version of golden syrup and therefore have a more intense caramel taste as compared to golden syrup. Light treacle is the same as golden syrup and can be substituted accordingly.

How Long Does This Syrup Last?

The good thing about golden syrup is its generally long shelf life. It keeps very well for a long time in a cool, dark place in our pantry. Homemade golden syrup can easily last for about a year.

How to Make Golden Syrup

There are only 3 ingredients (very common ingredients) required to make this homemade golden syrup:

The proportion of white sugar to water is 2:1. This means for every one part of water, you need to add 2 parts of sugar. As for the lemon, a thin slice is sufficient for a reasonably large batch of syrup, unless of course, you prefer the syrup to have a more intense lemon taste to it. The purpose of adding the lemon is not so much for the taste but more for preventing the sugar from crystallizing. So you get the idea. I have come across recipes that require lemon juice to be added to the syrup. However, I find popping a slice of lemon in is all that is needed for perfect homemade golden syrup.

You can make the homemade golden syrup in 2 different methods:

The first method, which is also the most common one you will find on the internet when you search for a homemade golden syrup recipe requires the syrup to be prepared in 2 parts. The first part involves caramelizing a small part of the sugar in the recipe with very little water. Once it turns into deep amber, the remain sugar and water is added in. The solution is then heated again over very low flames until it reaches the desired thickness.

The second method, which is what I always use is a simplified version of the above method 1. Instead of dividing the sugar and water into 2 parts and boiling them in 2 stages, I do it all at once.

I have also come across a few homemade golden syrup recipes that require absolutely no stirring during the caramelizing process to prevent crystallization. I always stir mine (though not too often). And I have never had the problem of crystallization, which I believe is solved by adding a lemon slice into the syrup.

Sugar caramelization can be a bit tricky. Once it starts to brown, it can really happen very quickly. At one point, you will have a very light golden syrup, and the next minute, you can end up with overly darkened syrup. The key is to keep the fire very low and keep watching the syrup.

How to Check if the Syrup is Done

If you have never made golden syrup, deciding when to remove the syrup from heat can be a bit tricky. This is because the syrup is very runny when it's hot and get pretty thick once it reaches room temperature. So, if you keep your syrup on the heat until it thickens to a honey-like consistency, you will end up with hard candy once it has cooled down. Try to get it off the heat before it reaches that stage.

If, after the syrup has cooled down to room temperature and is still a bit too runny, you can always return it to the heat and let it thicken for a few minutes.

On the other hand, if you find that your homemade golden syrup is overcooked that it has turned too thick, you can always add a little boiling water to it and reboil the syrup. As soon as the syrup starts to boil, remove it from the heat and let it cool. 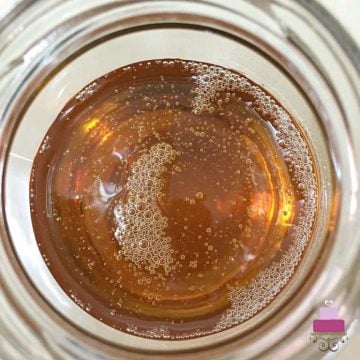 The syrup will still appear runny when you remove it from the heat and will thicken after it has cooled down. If, after the syrup has cooled down to room temperature and is still a bit too runny, you can always return it to the heat and let it thicken for a few minutes. On the other hand, if you find that your syrup is overcooked that it has turned too thick, you can always add a little boiling water to it and reboil the syrup. As soon as the syrup starts to boil, remove it from the heat and let it cool.

And that’s pretty much my homemade golden syrup recipe for you.