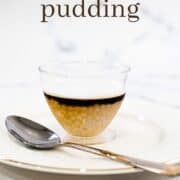 This coconut sago pudding is a super addictive dessert and is one of my favorite recipes. It's a very famous dessert in Malaysia and is made with just 3 ingredients - sago pearls (tapioca pearls), coconut milk and palm sugar (gula Melaka). Not only are the ingredients simple, making this awesome coconut and sago dessert is also super quick. You can get a bowl of this super yummy sago pudding in under 45 minutes!

This sago pudding can be served at room temperature but tastes even better when chilled.

The pudding is typically served in small dessert bowls, with the main ingredient, sago in the center and the milk and sugar syrup poured onto it. When served, you literally see a sago island in a sea of coconut milk and palm syrup.

To eat it, you either mix all the ingredients together or you simply scoop the sago along with some milk and palm syrup and enjoy it that way! Either way, the coconut milk, and syrup add just the right texture of creaminess and sweetness to the plain sago pudding, making this a super yummy sago dessert.

How to cook the sago?

How to know if the sago is cooked?

Why aren't the sago pearls visible as I cook them?

Can you shape the sago?

How long will the pudding last?

Can you substitute the palm sugar (gula melaka)?

How to make the palm sugar syrup?

Can the palm sugar syrup be made in advance?

Here's the full printable version of my sago pudding recipe with coconut milk and palm sugar. 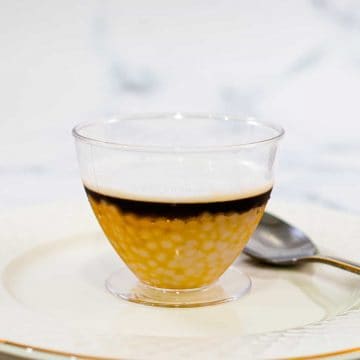 And that's that. My super yummy sago pudding with coconut milk and palm sugar syrup.