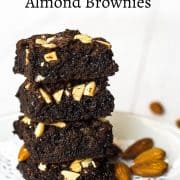 This fudgy almond brownies recipe is another one of my decadent brownie recipes collection. My other brownies are cocoa powder brownies and chocolate brownies.

The resulting almond brownies are not only moist and fudgy, but they also have in them a lovely nutty flavor that is made more prominent with the crunchy slivered almonds on top.

There is also all-purpose flour in the recipe, so this is not a totally gluten free almond brownie recipe.

I love these almond flour brownies and I am sure you would too!

How to Make Almond Brownies

These are the ingredients I used to make these deliciously nutty chocolate brownies:

This is a small brownie batch. It yields a brownie block of 6 inches by 6 inches. Cut into 1.5-inch squares, you will get about 16 squares of almond flour brownies.

The brownies last well at room temperature for a good 4 to 5 days.

The points I have below are generally applicable for all brownies, which is why you will literally see them in all my brownie recipes posts. I repeat these on every brownie page because these are often the most crucial factors that make or break a tasty brownie treat (other than a good recipe, of course).

The last point I have on this section is specifically for this almond flour brownie, so don’t miss that one! 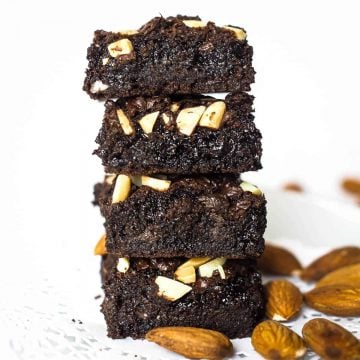 And that's my fudgy chocolate almond brownies recipe for you.