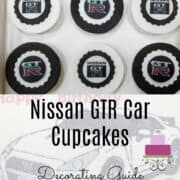 These Nissan GTR car cupcakes were part of a larger order by a dear customer of mine. The full order was for a Nissan GTR themed cake decorated in butter icing and along with it, a set of cupcakes decorated with edible images of Nissan GTR logo and related images.

I have a separate tutorial for the Nissan GTR car cake and you can read all about it here. This post is specifically for the cupcakes.

Unlike the cake which was fully covered in buttercream and butter icing, I used fondant for these cupcakes. And to match the overall theme, I used a mix of white and black fondant along with edible images of the Nissan GTR car logo to decorate the cupcakes.

These cupcakes were so easy to decorate, anyone can make them.

Main supplies for the cupcakes:

And that was pretty much how decorated these Nissan GTR car cupcakes. Wasn't that super straightforward?