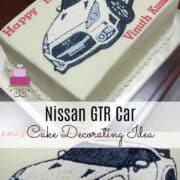 This Nissan GTR car birthday cake was ordered by a dear customer of mine for her boyfriend’s birthday. I am guessing that Nissan GTR must be his dream car, hence the design chosen.

I used star piping method to fill the icing for most parts of the car image on the birthday cake and for other parts, I used a plain round tip to pipe a closed zigzag pattern. And for the Nissan logo, I opted to use printed edible image. Since butter icing and buttercream had a natural yellow hue to it, in order to achieve totally white buttercream for the car, I added white food coloring to it. And I used the same white buttercream to pipe the birthday cake border. The birthday cake was ordered along with a set of cupcakes in a similar theme. Click here to see how I decorated the cupcakes.

These were the main supplies used for the birthday cake:

And this was how I decorated the birthday cake:

Tracing the image onto the car birthday cake

Covering the birthday cake with icing

And with that, the car birthday cake was complete.