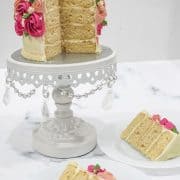 This rosette cake makes an elegant buttercream cake with pretty multicolor rosettes (roses) on its sides. This makes a perfect cake for birthdays. You can also make this rosettes cake into a 2 tier or 3 tier cake. It would be perfect for weddings too!

The rosette cake recipe on this page makes a small 5 inches round cake with a height of approximately 4 inches. The buttercream rosettes are in shades of burgundy and pink and are accented with white stars and green leaves for a really floral and elegant cake.

The rosettes or buttercream roses are all in random order, but I focused them on the upper half of the cake.

In piping the flowers, I alternated the colors. This is so that there is a balanced spread of them on the cake.

And to not move the focus away from the floral decoration on the sides of the cake, I made a simple border of white stars. I left the top of the cake blank with just a smooth coat of buttercream.

How to Make the Rosette Cake

Covering the cake with buttercream

Mixing the colors for the rosettes on the cake

Making rosettes on the cake

Next were the white star flowers on the rosette cake. I made them with star tip number 18, also in random order such they they filled up the gaps between the large and small buttercream rosettes.

Here is the full printable version of my rosette cake recipe with buttercream rosettes decoration. 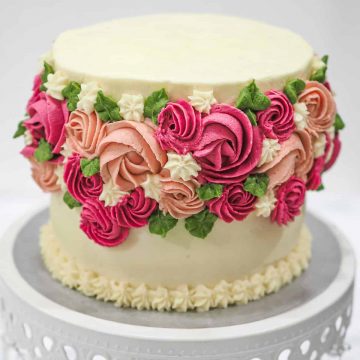 With that, my vanilla buttercream rosette cake was complete.