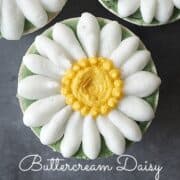 I love making buttercream daisies. They are not only so pretty but easy to make too. I have, in fact, made the exact same daisies on cookies but instead of using buttercream, I used royal icing. You can read all about the daisies cookies here and watch the step by step video on that page too.

Back to these buttercream daisy cupcakes.

I made these last weekend, along with my buttercream sunflower cupcakes. That was the first time actually, of me making the daisies and sunflower cupcakes. And much to my satisfaction, I totally loved the way the cupcakes turned out after decorating with the piped buttercream flowers that I decided I should create tutorials based on them straightaway.

So here I am, presenting to you my step by step picture tutorial and a video tutorial (at the end of this page), on how to make easy buttercream daisy cupcakes that you can pipe directly onto your cupcakes. No transferring and no freezing required.

These were the main supplies I used to decorate the cupcakes:

And this was how I decorated the buttercream daisy cupcakes