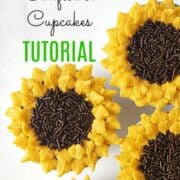 I have been wanting to make these pretty floral cupcakes for a very long time. And so I finally decided to make them last weekend and since they turned out so well, I decided to do a tutorial on them as well.

I made these cupcakes along with a set of daisy cupcakes. Since they too turned out pretty and nice, I’ve made a tutorial for them as well (click here for the tutorial).

With all the rage about buttercream flowers, I am sure these piped sunflower cupcakes tutorial will be useful. Instead of piping the sunflowers separately, freezing and then transferring them onto the cupcakes, I have decided to add the flowers directly onto my cupcakes. That way, no freezing was required, and the entire decorating could be completed pretty quickly too.

I used buttercream for the sunflowers. If you are not keen on working with buttercream, you can also make these in royal icing. Royal icing dries hard so if you use royal icing, you will get sweet crusted sunflowers for your cupcakes, which are not too bad, if you ask me.

Anyway, I have decided to use buttercream for this tutorial. Below are the all the supplies you would need and step by step picture tutorials for the buttercream sunflower cupcakes. There also a video at the end of the page so don’t forget to watch that too!

How to Make Sunflower Cupcakes

Main supplies for the cupcakes:

And below is my step by step guide on how to make sunflower cupcakes:

Marking the lines for the sunflower petals

And that’s that. My super simple and super pretty buttercream sunflower cupcakes are complete.

Here is the video of the sunflower cupcakes tutorial above:

Hope you find this useful.