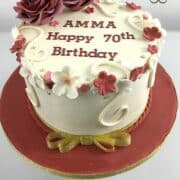 Here is a 70th birthday cake idea I choose and decorated for a close friend’s mum recently.  This dear friend of mine whom I have known since my college days requested me to make a simple fondant covered cake for her mom’s 70th birthday. She wanted to have a special celebration with close family members to mark the memorable special occasion for her mom and wanted the cake to be special too. Having said that, she was not too picky about the design and only requested a single-tiered cake covered in fondant with a simple maroon themed design.

So I suggested a few designs and she picked one with a floral theme. And this was how the 70th birthday cake turned out:

Deciding between white and ivory

There is a bit of a story behind this 70th birthday cake. It was originally supposed to be covered in white instead of ivory as in the picture above. That was what my friend wanted anyway. And at the back of my mind, I knew I had enough stock of white fondant to cover the cake. So I did not check on it until just one day before the order was due.

And I realized (at night that is!)then, when I opened my fondant container that I forgot to seal the bag when I opened it the last time I used it which was like 2 or 3 weeks ago. To my horror, the fondant was already crusted on the outside. And I knew it was not going to work for the cake. And there was no way for me to get another batch because it was already 7pm and I promised I would deliver her the cake the next day.

I quickly thought of an alternative and decided to cover the birthday cake with butter icing. I couldn’t even make my own at that time as I did not have enough stock of icing sugar and gelatin.

So I called up my friend to ask if she was ok with butter icing. She agreed but I could sense that she was not 100% ok with it. I felt really horrible for having to disappoint her and decided to go through all my fondant containers one more round to see if I had any white or any other colors that would work with Maroon.

I did not find any white, but had enough ivory colored fondant to cover the cake. And I knew ivory is a pretty color. So I called her up again and told her not to worry, I had the issue sorted out.

That was quite a few hours of stress I went through and reminded me of how planning well ahead and checking on stock well ahead of time is very very important.

Ok, so lets get on with this 70th birthday cake idea.

How to Make a 70th Birthday Cake

Lettering on the 70th birthday cake

Block alphabets in gum paste, on the 70th birthday cake

And that’s it. A 70th birthday cake idea for a charming lady.

Hope you enjoyed this. Happy Decorating 🙂