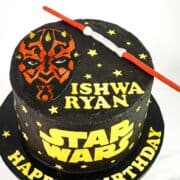 This cake was for a 7 year old, die hard Star Wars fan in my family, my little nephew.

When the request came to me for a Star Wars cake, I asked if he had any specific characters that he liked in Star Wars. Darth Maul’s lightsaber was the answer I got.

This little boy, according to his mom, is particularly thrilled with Darth Maul’s lightsaber. It was simply because it could light up on both sides, hence his choice of Darth Maul and his Lightsaber.

I tried to keep the design as simple as possible as requested by the birthday boy’s mom. All in all was very happy with the way the cake turned out. I was able to put this cake together fairly quickly. And the birthday boy was absolutely thrilled with his Star Wars cake.

How to Make a Star Wars Birthday Cake (from scratch)

These were the main supplies I used to make this cake:

And this was how I put the Star Wars birthday cake together:

The stars and alphabets on the cake

The lightsaber on the Star Wars birthday cake

And with that, the Darth Maul Star Wars birthday cake was complete.