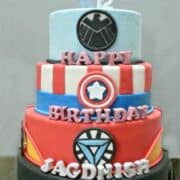 I made this cake for my son’s 12th birthday. We had a Marvel Superheroes themed party for his 12th birthday and so when I asked him which superhero he wanted on the cake, he said all! So, I designed a cake, trying as much as I could to incorporate as many of his favorite superheroes on the birthday cake as possible. We had Thor, Captain America, Iron man, Hulk, Spiderman, Wolverine and the Agents of Shield represented on the superhero birthday cake!

Making or sculpting the superheroes figurines is not exactly my cup of tea. So I negotiated and succeeded in making my boy agree to have his cake decorated with the superheroes’ logos and symbols instead. And as a bonus, I made a 3D Thor hammer as the cake topper.

This was a large superheroes birthday cake. The top tier was 8 inches in diameter, and the bottom tier was 14 inches in diameter. We did not need so much cake at the party, so only the 2nd and 3rd tiers were real cake, which was 10 inches and 12 inches cake each.

How to Make a Marvel Avengers Superhero Birthday Cake

Baking and preparing the cakes

The side design of my Marvel Avengers Superhero birthday cake

The other side of my Marvel Avengers birthday cake

The alphabets on the cake

The front of my Marvel Avengers Superhero birthday cake

The back of my Marvel Avengers birthday cake

And that’s that. My Marvel Avengers Superhero cake.