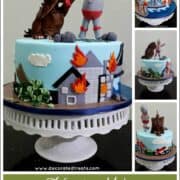 I made this Ultraman cake for little Daryl on his birthday. The cake was requested by his mom and I am guessing Daryl must be a big fan of Ultraman. For those of you who are not sure who Ultraman is, he is one of the Superheroes from Japan who is always around to save people from beastly monsters.

Ultraman cake with Ultraman topper and a monster topper

And this cake is an attempt to capture Ultraman in his bid to save the town from being destroyed by an ugly brown creature.

The sides of the cake basically featured 4 different scenes. One was with burning buildings. The second one was with a torn down tree. And the third and fourth were an overturned car and a broken bridge.  On top of the cake were Ultraman and the beast. Despite a lot going on on the cake, it was pretty easy to decorate it. The only time consuming and tricky bit was making the Ultraman figurine and the monster. I used Styrofoam balls as the base for both the figurines. They don’t take too much time to set this way. Plus they are way lighter than if I were to use fondant throughout.

How to Make Ultraman Cake:

Main Supplies for the cake:

Ultraman and the monster cake toppers

Decoration on the sides of the Ultraman cake

The first scene for the cake sides

Burning buildings on the sides of the Ultraman cake

The second scene for the cake sides

Burning and broken bridge at the back of the Ultraman cake

The third scene for the cake sides

A fallen tree is another deco element on this Ultraman cake

The fourth scene for the cake sides

A turtle turned car on the Ultraman cake

Decorating the cake board

And that’s pretty much my Ultraman cake decorating guide.