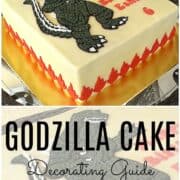 I made this Godzilla cake for 6-year-old Eshan. This was a last-minute request. And the birthday boy’s mom was very accommodative about the cake design so I accepted it. All she wanted was a Godzilla themed cake. Knowing that time was not on my side, she was ok with simple cake design, so long as Godzilla was on it.

As much as I would have preferred to make a 3D fondant Godzilla for little Eshan, I neither had the time to make one nor was there enough time for the 3D fondant Godzilla to set. And so I settled for this buttercream decorated design. The entire cake was decorated in butter icing and the Godzilla image was piped in buttercream. Overall, this was a pretty quick and easy cake to make.

How to Make a Godzilla Cake

These were the main supplies needed to decorate this Godzilla cake:

And that’s that. Godzilla birthday cake for 6 year old Eshan.