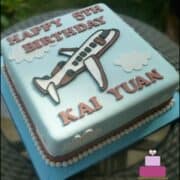 This airplane cake is a single-tier chocolate cake covered in fondant and topped with a 2d royal icing airplane. The fondant clouds randomly added to the cake match the overall theme of a flying airplane. An absolutely easy and creative idea for anyone attempting to make an airplane (aeroplane) themed cake!

I made this airplane themed cake for a 5 year old boy’s birthday a couple of years back. It was the boy’s wish to have a cake with airplane on it for this birthday and so his mom requested that I make one for him.

Why is this cake different from all my other cakes

This cake was very different from all my other cakes and that is simply because the birthday boy was lactose intolerant which meant no butter and milk and milk-related ingredients in the cake or the icing. All my cakes were made using butter and have milk in them (see my cake recipes here), so I was reluctant to accept the order at first. I also told the mom that I do not have a separate set of utensils and cake pans to cater to her order and she was ok with me using my existing ones.

We discussed further on the cake and agreed that I would bake the cake using margarine (hydrogenated palm oil) and that I will use water instead of milk in the cake recipe. Margarine produces cakes that are as soft and fluffy as butter does and I know this because my mom used to bake cakes using margarine when I was a kid.

So, to cater to my customer’s needs and to make sure none of the ingredients I use in the cake could cause an allergy reaction to her son, I gave her the list of ingredients that would go into her cake. She then confirmed the ones that were ok to be added and the ones that were not. So it turned out that only butter and milk had to be substituted. I baked a chocolate cake for the boy using my chocolate cake recipe but substituted butter with margarine and milk with water.

As for the frosting, since I fill and crumb coat my cakes with buttercream before covering it with fondant, I had to substitute the butter with margarine and use a margarine-based butter cream as the cake filling and crumb coat.

How to Make an Airplane Cake

These were the main supplies I used for this airplane cake:

Filling up the outlines

Getting the cake ready

With that, my airplane birthday cake was complete.