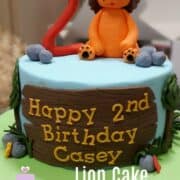 I made this lion cake for 2-year-old Casey. This was one of the 2 lion-themed cakes I made for this little boy on his 2nd birthday. This cake was ordered by his mom along with a set of 20 cupcakes for this birthday celebration at school. The cake was to be cut in school and the cupcakes (with 3D lion toppers) were to be given out to each of his classmates.

Lion cake for a 2nd birthday

I have a separate post on the cupcakes and you can read all about them here. This post is more for the cake, which was decorated pretty much in the same theme as the cupcakes. In fact, the lion topper on this cake is of the exact same design as the ones on the cupcakes except that it is slightly larger in size.

Overall, this was a pretty simple cake to decorate. Other than the 3D lion topper and the number topper, everything else was pretty easy to make.

How to Make a Lion Cake

These were the main supplies I used to decorate this lion cake:

And this was how I put the cake together:

The alphabets on the cake

The trees on the sides of the cake

Deco on the sides of the lion cake

And that’s that. My lion cake for 2-year-old Casey. I have also made another lion cake for Casey, and this time, it was for the celebration with his family. See how I decorated the other lion themed cake here.

Hope you enjoyed this.