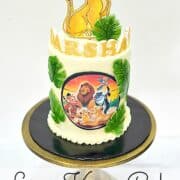 Here is a simple Lion King cake design decorated in buttercream and fondant. This is a pretty easy cake to put together and makes an awesome Lion King themed birthday cake for Simba and Lion King fans!

When I asked my 6 year old boy, the cake design he would like for his 6th birthday last year, he was toying around a few ideas and finally, settled on a Lion King themed cake.

I was not surprised with his choice, the movie The Lion King was released in cinemas just a few months before his birthday and he was so into Lion King then.

He did not just stop at choosing the theme for this Lion King cake, he was involved in choosing the design too!

He wanted Simba as the main character and along with Simba, he wanted the entire Lion King family in Pride Rock including Timon, Pumba, Zazu, Rafiki, Nala and Mufasa. And so I set on making a Lion King cake for him.

This was a buttercream covered birthday cake and decorated with an easy DIY Simba cake topper (made with paper), Lion King themed edible image, and fondant jungle leaves and letters.

All in all, I had a lot of fun decorating this Simba Lion King cake and hope you would too!

How to Decorate the Lion King Cake

Raw Materials for the birthday cake

And this was how I put the Lion King cake together:

How to Make Simba Cake Topper

The reverse side of the cake topper

The Lion King themed edible image on the cake

And with that, the Lion King cake was complete. My son was truly happy with his cake. I was happy to make him happy and I hope you will find this tutorial useful.

Here is the full printable recipe and decorating tutorial of the Lion King cake. 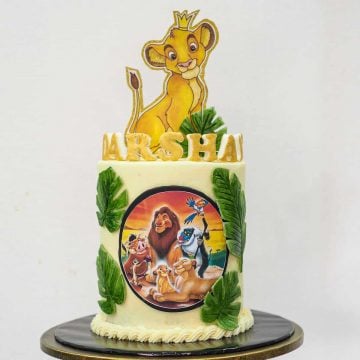 And that's my easy Lion King cake decorating design and tutorial for you.