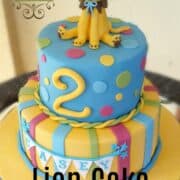 This Lion cake design was created for little Casey who was turning 2. It was a simple 2 tier cake decorated with celebration-themed cheerful colors and a lovely fondant lion topper.

The cake was based on an image provided by my customer and I tweaked it slightly to suit my customer’s request. The original designer of this cake is tortenberlin.blogspot.com.

Now, this cake had extra deco in the form of bursting stars from the sides of the cake but I just realized as I was writing this post that I do not have any pictures of the complete cake! And that was because I only put the stars on the cake upon delivering it to my customer’s place. And then I forgot to snap a photo of the complete cake! So here I am with my not-so-complete cake. Anyway, the cake still looked very beautiful without the stars, thanks to tortenberlin.blogspot.com for designing it.

I definitely enjoyed decorating this cake and totally loved how the lion topper turned out.

How to Make a Lion Cake Design

And that was that. Lion cake design for 2 year old Casey's birthday.