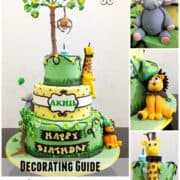 I made this jungle animals cake for a 1-year old boy’s birthday. The party theme was centered around jungle animals and the mother requested me to design a cake to match the theme. She also had theme colors for the party, which were green and yellow, so I made sure to have those 2 colors as the main ones on the cake. She also requested that the birthday boy is represented with a monkey topper!

Making this cake was really fun and a real challenge too. Fun because I had the liberty to design the cake instead of my customer dictating the design to me. Challenge because I had this brave idea of making a 3D monkey swinging by its tail on a tree on top of the cake while blowing his birthday candle. And I wanted the monkey to be able to literally swing when rocked.

Making a 3D monkey and hanging it onto a branch, though may sound like a simple idea, was on the contrary, quite tricky. The tail had to be strong enough to hold the weight of the monkey and its hands and feet also had to be positioned such that all looked natural when assembled.

I must admit, I spent a considerable amount of time trying to get that little fella’s hands, feet and tail in place. The rest of this jungle animals birthday cake decoration was pretty straight forward. Everything on the cake was handmade with fondant including the tree, which had wires for support and the animals had Styrofoam balls inside them as the base.

How to Make a Jungle Animals Cake

Animal Toppers on the Animals Cake

I started by preparing the animals toppers first. All of them were formed by hand. And I used one Styrofoam ball each as the base. There are 2 reasons for using Styrofoam balls. Firstly, it saves on my fondant. Secondly, the animals set much faster. And are much lighter too. This was particularly important for the monkey topper as its entire weight was supported by its thin tail. Having a lighter weight makes a lot of difference.

I had a total of 4 animal toppers – the monkey, giraffe, elephant, and lion. I did not capture step by step images of making these animals, but I do have the close-up pictures.

How to Make the Elephant Cake Topper

A cute elephant cake topper on the jungle animals cake

The elephant holding a balloon on the animals cake

How to Make the Lion Cake Topper

The body and face

The back of my 3 tier jungle animals cake

How to Make Giraffe Cake Topper

Colors for the giraffe

Forming the giraffe body and head

The legs and hooves

The giraffe's mane and the bow

Side view of the giraffe topper on the jungle animals cake

How to Make the Monkey Cake Topper

Cute monkey, literally swinging from a tree on the animals cake

How to Make Fondant Tree

How to Assemble the Jungle Animals 1st Year Birthday Cake

Cute wordings on the animals cake

Attaching the trees to the animals cake

The grass border on the bottom tier of the animals cake

A tiny birthday cake and candle as the animals cake topper

The side view of the animals cake