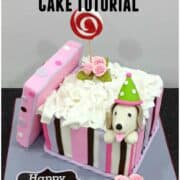 A cute Puppy in a Box cake for a customer

The cake was pretty straightforward to decorate, I had the box cover that is leaning against the cake made in Styrofoam and covered in fondant. That saved me the trouble of having to structure and support had the cover been made of cake. And the puppy head was made of fondant that has been added CMC. The lollipop was hand made with fondant and the pink roses on the cake were store-bought.

How to Decorate the Puppy in a Box Cake:

Main supplies for the puppy cake:

A cute puppy topper for a Puppy In a Box cake

Decorating and assembling the cake:

The completed Puppy in a Box cake

And that's my puppy in the box cake.

Hope you enjoyed this sharing.