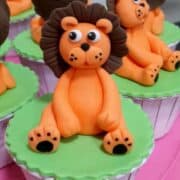 Looking for lion cupcakes for kids? These cute lion toppers will surely delight any child.

Casey's lion cake and cupcakes for his school celebration

Now, these lion cupcakes were not my original idea. I made them based on an image provided by Casey’s mom. I tried to find the link back to the original designer and found them to be from Yenni Ng of Cotton Candy Bakeshop however, I am unable to provide a direct link as the link to the website is broken.

Nevertheless, these were really cute cupcakes. I had so much fun making them especially since I had to make many of them and each one similar to the other.

My trick in getting all these lions in the exact same shape and size is by portioning each part of the lions in batches. For example, I started with the lions’ bodies. I portioned 11 pieces of the same sized fondant that would make up the bodies of each of the lions and shaped them to the shape of the lion bodies.

And then I portioned the legs for all the 11 lions followed by the rest of the body parts. I kept these covered so that they did not dry out. And then I worked on the portioned pieces one body part at a time. This way, I was able to get all the lions in the same size.

How to Make Lion Cupcakes

These were the main supplies I used for the lion cupcakes:

And this was how I put the cupcakes together:

The paws and whiskers

And with that, the cupcakes were complete. See how I decorated the lion cake here.