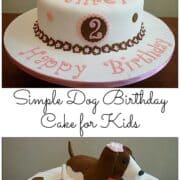 Looking for ideas of a simple dog birthday cake for kids? Here is one I made a while ago for my sister’s friend. She wanted me to make this cake to celebrate her daughter’s second birthday. This was one of the many cakes I have made for her and it is always a pleasure to bake and decorate for her as she truly appreciates my work.

I am guessing that the daughter must really like dogs that the mother requested for a dog-themed birthday cake. Anyhow, I for sure truly enjoyed decorating this cake. This was not the first dog-themed cake that I have decorated. I made a 2 tier cake with a dog topper and matching dog themed cupcakes for my niece’s first birthday and another one here, so this cake was the second dog themed birthday cake for me.

Main supplies for this birthday cake:

And this is the decorating guide for this simple dog birthday cake for kids:

The brown mat on the birthday cake

Polka dots on the birthday cake

And with that, my dog birthday cake was complete.

Hope this simple dog birthday cake for kids has inspired you to make one of your own.