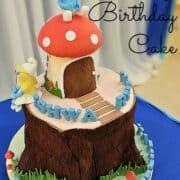 I made this Smurfs cake for my nephew’s first birthday. I must say, this was a challenging cake to decorate especially when it comes to making the Smurfs in fondant, but yet, it was exciting as the cake design and shape was not a typical stacked round cake.

My sister did not want too much cake, hence the use of the Styrofoam base. She also ordered a set of Smurfs themed cupcakes for the son’s birthday party and so did not need much cake.

Overall, the most time-consuming process was making the Smurfs cake toppers. It was quite tricky to get the face to look exactly like the real Smurfs and I had to make them a few times to get them right. The rest of the deco was pretty straightforward.

How to Make a Smurfs Cake

Main supplies for the Smurfs cake:

And with that, the Smurfs cake was complete.

And that’s that. Smurfs cake for a 1st year birthday.