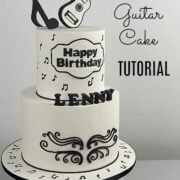 Fancy making a guitar cake with a cute guitar topper?

Here is one such cake idea I created for a birthday. The guitar topper was made in fondant (click here for the step by step tutorial on how to make the guitar topper). The entire cake was decorated in black and white. The decoration on the cake centered around musical notes.

This was not a very difficult cake to decorate. If you read on below as well as my tutorial on the guitar cake topper here, you will see that it is pretty straightforward to decorate. All the musical notes on the cake (except for the 3D one on the cake top) and the cake board were drawn by hand using a black edible marker. The black swirls on the front of the bottom tier were made using fondant. However, I used a paper template as a guide in forming those. So that made it easy to get them all consistent.

Lets look at full details on how to make a guitar cake:

How to Make a Guitar Cake

Main supplies for the guitar cake:

How to assemble the fondant guitar cake:

And then, I used my plaque cutter to cut the birthday plaque out.

Attaching the swirls to the cake

This was how my completed guitar cake looked like: