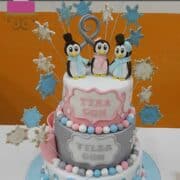 I made this triplet penguins birthday cake for a set of triplets – 2 boys and a girl - for their 8th birthday. This cake was designed based on an image from the Pink Cake Box provided by the mother. I modified the design to cater to my customer’s request to have the cake design modified for a set of triplets. The original cake by Pink Cake Box had one large penguin topper and was a topsy turvy cake. Mine, however, was a normal 3 tier cake. Plus it had additional 2 penguins as toppers and also 2 snowmen at the base of the cake.

I really loved the way the cake turned out. And I really had fun a lot of fun making it too. It was fairly easy to decorate as I prepared all the toppers and the bow ahead of time.

How to Make the Penguin Cake

Main supplies for this penguin cake:

The penguin and snowmen toppers

The names on the cake

Adding the bow to the cake

And that was how I decorated this triplet penguins birthday cake.