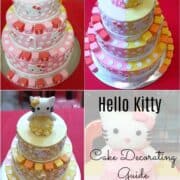 I made this cute Hello Kitty cake for little Regine’s 1st birthday celebrations. First-year birthdays are very special for both the children and their parents and it was such a pleasure for me to be able to be part of these important celebrations with my cakes.

And this particular cake was quite special as Regine’s mum, Janice used to work in the same office as me and when she asked me to make a cake for her daughter, I was totally delighted.

The cake design was provided by Janice and as usual, I tried to trace back to the original designer of the cake and found it to be from Ginas Cakes.

And off course it is not exactly the same as in the link above as I have made slight modifications based on Janice’s request.

Overall, it was a fun cake to make. It was quite tricky to make sure the dual colors on each tier were combined in a straight line and right in the middle of the cake. Even the Hello Kitty fondant topper was double-sided to match the cake tiers.

How to Make a Hello Kitty Cake

Main supplies for this cake:

The Yellow Side of the Hello Kitty Cake

Hello Kitty face decoration on the sides of the cake

The pink side of the Hello Kitty Cake

And that’s that. Hello Kitty Cake for Regine’s first birthday.