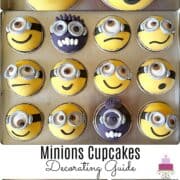 I made these minion cupcakes for a 1st year birthday party. The cupcakes were ordered together with a 3D Minion Dave cake and both were made based on images shared by my customer.

I have covered the cake in my other post here. And this was how the cake looked like:

This post is all about the Minion cupcakes. As cute as these cupcakes look, I must admit that the original design is not mine. I merely remade these based on my customer’s request. So as usual, I tried to retrace the source of the image shared by my customer but unable to find the exact one on the internet. There are many variations of these cupcakes and so it is hard to tell who was the original designer.

Anyway, if you notice, the cupcake tops are rounded and the truth is, my cupcakes were not all so well rounded. I used a special technique to get them into such a shape. I cut the fondant using my round cutters and let them set in a small bowl. That way, the cutouts were rounded following the shape of the bowls. Once set, I removed them from my bowls and attached them to the cupcakes. To fill the gap in between the curved fondant top and the top of the cupcakes, I piped a generous amount of frosting in between.

Overall, I really enjoyed decorating these cupcakes. My customer was very happy that they turned out exactly as in the image she provided me. This is how I decorated the cupcakes:

How to Make Minion Cupcakes

These were the main supplies I used to decorate the cupcakes:

And this was how I put the Minion cupcakes together: