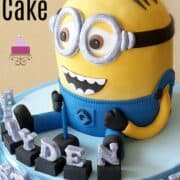 This Minion Cake request came for a 1st year birthday party. And I still remember my customer being so particular about the colors of the cake being exactly the same as the real Minion character. She personally told me after I showed her a photo of the completed cake ( a day before the delivery), how satisfied she was with the cake and how worried she was initially that the Minion’s blue and yellow will not be in the exact shade of that of the Minions.

She has had not-so-pleasant experience with other bakers in terms of getting the cake designs to be exactly as she wanted it and I could totally understand her concerns. Who wouldn't when you pay so much for a cake but end up getting a substandard one, right?

So back to the Minion cake. I made this cake a couple of years back, I think about 5 to 6 years ago. And this was my first Minion cake. So I was pretty excited to decorate one when the order came in.

The order also came with a request for a set of 12 Minion cupcakes. I have covered these cupcakes in another post (coming soon). This post is for the the Minion cake.

How to Make a Minion Cake

These were the main supplies I used to decorate the cake:

And this was how I decorated Minion Dave in this Minion cake:

Covering the cake with fondant

With that, the Minion cake was all complete.

Hope you find this useful.